I’ve been married for almost seven months. Since my wedding I’ve knit 25 hats, five sweaters, three scarves, and one blanket.

I started my first “married life” knitting project on the third day of my honeymoon. It was a ribbed seed stitch hat in my wedding colors–deep reds and purples. I pretended that it was for my husband, even though I knew there was way no he’d wear such a feminine pattern. I started the hat over more times than I can count. I didn’t start over because of any mistakes–I hadn’t dropped a stitch or miscounted any rows. The pattern wasn’t complex. I just knew each time that I finished that it wasn’t quite right. Every time I got to the last row of the hat, I’d finish as instructed, threading the yarn through the remaining stitches and pulling it tight. Instead of weaving in the ends, though, I’d just completely undo the whole thing and start from the beginning.

I knew how to knit before I got married, but I never trusted myself to do anything more complex than a simple hat, knit in the round, just knit, purl, knit, purl. I’m happy to say that out of the 25 hats I’ve knit since my wedding day, not a single one is that old favorite of mine. Before the wedding, I avoided new patterns because I avoided counting as much as possible. How could an activity be fun if it involved math?

It was that third day of my honeymoon, and that brand new hat pattern, that taught me how much I needed to count stitches. I learned that if I was counting stitches, I wasn’t counting other things, like the number of the days my husband had been in the ICU, or the number of nurses that cried when they saw me. If I focused on the 44 stitches I had to cast on to a pair of size 11 needles I might not notice that his ICP* levels kept creeping up. The number 44 isn’t so scary when it’s just the number of stitches in a row, but when it’s the number flashing on your husband’s monitor next to “ICP”  as one of his nurses ushers you out, and three doctors rush in, it is scary.

I wasn’t supposed to have to time to knit on my honeymoon. I was supposed to be rappelling down waterfalls in the Azores and soaking in thermals baths, but you can’t do that when you wake up in the middle of your wedding night to sound of your husband falling down the stairs. Going to the bathroom should be easy. It shouldn’t end with your husband lying in pool of his own blood. The first time you use the phrase “my husband” shouldn’t be when calling 911, and as much as you love your bridesmaid, she isn’t the person you should be sharing your bed with. I wasn’t supposed to spend the third day of my honeymoon in the waiting room of the ICU sobbing with my mom, not understanding why my husband wasn’t awake and what it meant that his nurse had kicked me out.

In the waiting room, I just focused on the ribbing of the hat. Knit 3. Purl 2. Repeat. I was already switching to larger needles to begin the rest of the hat when his nurse came out and told me I should say goodnight. The pressures in his brain were just too high for any extra stimulation, even if I just sat next him counting my knits and purls.

The hospital called me at 4am the next morning to tell me that they were rushing my husband in for an emergency decompressive craniectomy. They could no longer control the rising pressure in his brain with medication alone, so they removed half of his skull. I realized I’d have to adjust my hat pattern if it was going to fit my husband’s new head, so I started over, knitting and counting the stitches until he woke up.

*  Intracranial pressure–levels between 7-15 are normal. Levels above 20 are dangerous and indicate brain swelling 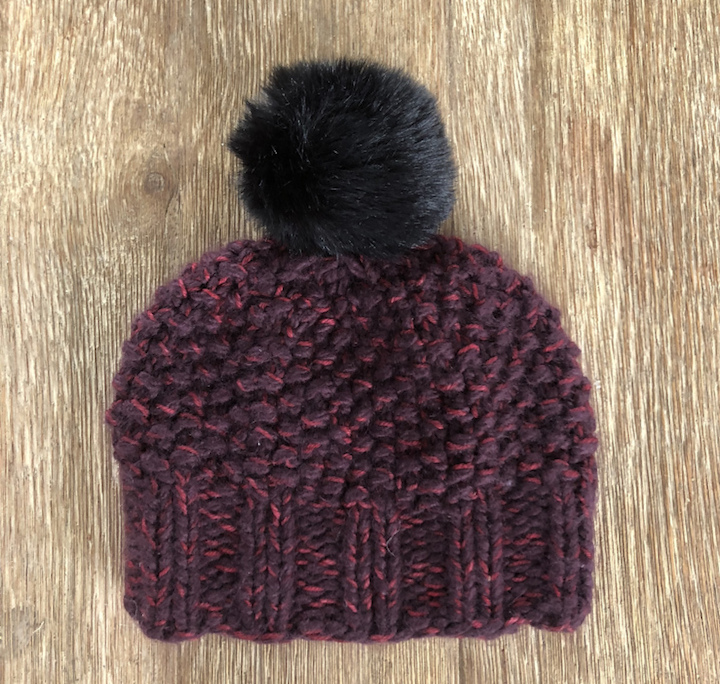 Here is the hat after 5 months of heavy wear.

K1, P1 until last stitch, make one stitch to get 45 stitches.

Repeat rounds 1 and 2 until hat measures between 7 and 8.5 inches (depending on how slouchy you want your hat)

Repeat these two rounds until only a few stitches remain, switching to dpns, or Judy’s magic loop

5 thoughts on “Knitting through the Honeymoon”